The Eye of Horus (also known as The Eye of Ra) is a symbol of Egyptian origin that stands for health, knowledge, and power.

It contains rich symbolism that has deep meaning, being a collection of symbols itself.

In addition to health and power, it is also believed to give protection to its bearer. This is the reason that many sailors painted the Eye on their ships before they sailed towards the troubled waters in the sea. They believed that the Eye will provide them safety from both the sea and the pirates.

The Eye of Horus is composed of three major components:

Meaning of Different Components of the Eye of Horus 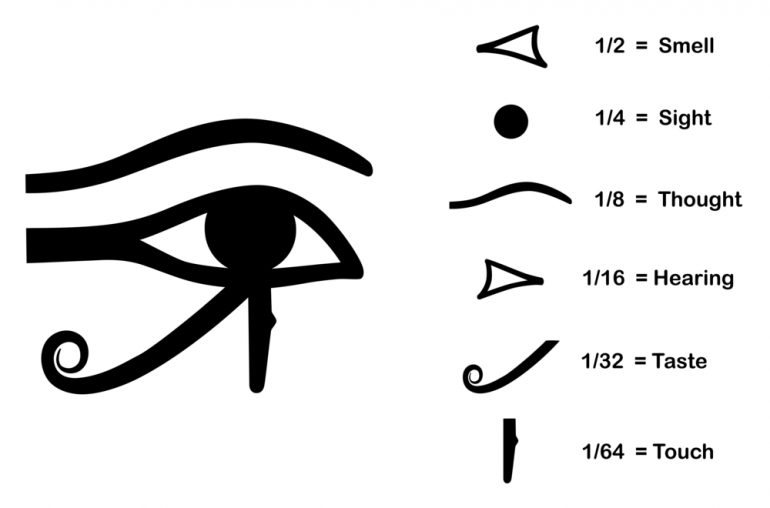 The Eye represents the all-seeing Egyptian god Horus. Horus is the sun god in Egyptian mythology and sun is the source where all the light in the world comes from. The ever shining and all-seeing eye of the sun guides people in their path. So The Eye symbolizes enlightenment.

The Teardrop and its significance in the Eye of Horus tattoo has been argued and explanations for the symbol’s meaning vary. The most popular explanation is that the teardrop is actually the representation of a falcon. Falcon is associated with extraordinarily accurate vision, strength, and power. The theory about falcon makes sense because falcon was important to Horus. In fact, he was believed to have a head of a falcon.

The Spiral in the Eye of Horus is believed to represent serpent. In addition to falcon, Ureaus serpent (an all-seeing serpent, believed to have ability of spewing fire) was also sacred to Horus as it saved Horus and all of Egypt. Serpents also have symbolic meaning of protection, awareness, and balance. The spiral extending from the eye might also have symbolic significance in the form of expansion of post death awareness.

The Eye of Horus, on the whole also has many differing meanings and interpretations. Some of those interpretations are based on the different parts of the symbol and their meanings, but some are entirely different.

For example, the Eye of Horus is also believed to bring vision, equilibrium, and fairness. It is important to note here that some altered versions of The Eye of Horus exist in other cultures too.

While the Egyptian culture sees the Eye as an honor to the god, other cultures have different interpretations and meaning for the symbol of eye. In Indian culture, the symbol of the Eye is perceived as the third eye. The third eye refers to the invisible eye which gives awareness to the people outside the ordinary sight. In modern spirituality, the third eye is associated with the state of enlightenment and wisdom. However, that symbol is slightly different than the Eye of Horus symbol, despite having the Eye.

Reasons for Getting Eye of Horus Tattoo

Following are some of the reasons for getting Eye of Horus as a Tattoo:

Apart from the above mentioned reasons of getting The Eye of Horus as a tattoo, many people have their own personal interpretations of the tattoo, too. Some people get the altered versions of The Eye of Horus in order to suit their needs.

Health Risks of Tattoos and Piercings

Tattoos and Piercings in the Workplace